By Tina / 15th June, 2015 / No Comments
The FDA wrapped up a two-day hearing this week on whether or not Homeopathic remedies should be regulated like drugs. Listening to critics of Homeopathy try to justify why they don’t think the American public should have free access to Homeopathic remedies leaves one wondering just what the real motivation is behind these criticisms.The two dominant criticisms made against Homeopathic remedies are antithetical to each other. Critics complain that due to a lack of regulation Homeopathic remedies are dangerous, but then they turn around and say that homeopathic remedies are simply useless sugar pills with no therapeutic effect whatsoever, and no better than a placebo.
Both cannot be true.
Is this the new standard of scientific scrutiny that federal agencies are using to supposedly protect the public?

The mainstream media is doing its best to comply with the pharmaceutical industry’s desire to paint homeopathic products in a bad light, and doing a very poor job of it. According to the mainstream media, which is obviously being fed statistics from the pharmaceutical industry and the federal government and doing no independent investigations of their own, what is the basis for claiming that Homeopathic remedies are “dangerous”?

A top federal drug regulator says that increased safety problems with Homeopathic remedies contributed to the government’s decision to revisit its oversight of the products at a public hearing this week.

In perhaps the most serious case, in 2009 the FDA ordered the maker of Zicam to stop marketing three products that contained zinc gluconate. The agency linked those products to 130 reports from consumers who said they lost their sense of smell.

That was the “most serious case” of “increased safety problems” with Homeopathic remedies which has prompted an FDA review. 130 people claimed they lost their sense of smell, a claim that the manufacturer says was actually never proven [2].

Contrast this to consumer reports of adverse effects from FDA approved drugs. 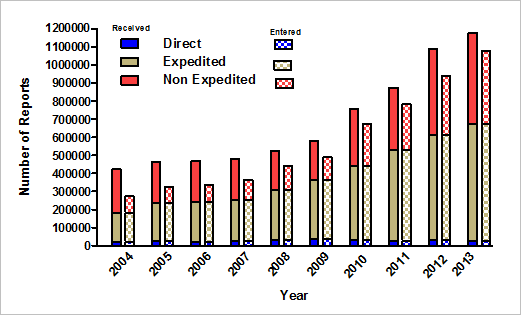 Over 1 million FDA-approved drug side effects are reported each year now, including serious side effects such as death (over 100,000 deaths a year). It is admitted that these voluntary reports do not encompass the totality of all prescription drug side effects.

Drugwatch.com, which is hosted by a Washington D.C. law firm, states:

Each year, about 4.5 million Americans visit their doctor’s office or the emergency room because of adverse prescription drug side effects. A startling 2 million other patients who are already hospitalized suffer the ill effects of prescription medications annually. (Source [5].)

Clearly safety of non-FDA-approved Homeopathic remedies is not the issue here, especially as compared to FDA-approved drug side effects.

FDA approved drugs are dangerous and deadly. Homeopathic remedies are not.

What is the Real Reason the FDA Wants to Eliminate Homeopathic Remedies?

The real reason why the FDA and the pharmaceutical industry want to regulate and eliminate Homeopathic remedies is no secret, and we do not even need to speculate about it. They come right out and tell us the reason:

Still, perhaps the greatest harm caused by Homeopathy is not necessarily caused by the products themselves—which, when properly prepared, rarely contain anything other than water and inactive ingredients such as sugars and binding agents—but by the fact that people often rely on Homeopathic products to the exclusion of proven scientific remedies. (Source [6].)

Homeopathic remedies present a threat to the marketing of dangerous drugs (not people), as homeopathic product sales in the U.S. have increased 16% over the past 5 years to $6.4 billion annually, with projections to reach $7.5 billion by 2017. (Source [7].)  If a Homeopathic remedy is marketed for a specific illness where a FDA-approved pharmaceutical drug already exists, the FDA wants you to choose the drug instead.

But if too many people start making the “wrong choice,” they want to take away your freedom to choose. This kind of action is well documented against other health products, particularly competing “unapproved” cancer remedies which historically are always outlawed to protect the huge cancer drug business. (See: Unapproved but Effective Cancer Cures [8].)

If the FDA does decide to regulate Homeopathic remedies, then only those remedies approved by them will be allowed to be sold, classifying them as drugs. There are only a handful of companies in the United States that the FDA allows to have drugs approved. Homeopathic remedies, and their booming popularity, would become part of Big Pharma.

Worldwide Homeopathy is Growing Rapidly Outside of the U.S.

Homeopathy was one of the most common medical practices in the United States in the 1800s. In 1892, homeopaths in the United Stated controlled about 110 hospitals, 145 dispensaries, 62 orphan asylums and old peoples homes, over 30 nursing homes and sanitaria and 16 insane asylums. However, the pharmaceutical industry did everything it could to stomp out homeopathy, and it is not as widespread in the U.S. today as it once was. (See: American Medical Revolutions: How the AMA Took Over America [9].)

According to recent surveys in France, an astounding 40% of the French public have used Homeopathic medicines, and 39% of French physicians have prescribed them. At least six French medical schools offer courses leading to a degree in Homeopathy, and Homeopathy is taught in all pharmacy schools and in four veterinary schools. In a prominent French news magazine President Francois Mitterand and six medical school deans called for more research on Homeopathy.

To further aid the growth of Homeopathy, the late President of Germany, Karl Karstens, and his wife, Dr. Veronica Carstens, who is a medical doctor and a Homeopathic physician, recently started a homeopathic research foundation. Numerous new research efforts in Germany and throughout Europe have begun in the past couple of years.

Despite Homeopathy’s impressive popularity in Europe, it is even more popular in India. Presently, there are over 100,000 Homeopathic doctors and over 100 four- and five-year Homeopathic medical colleges in this country. Homeopathy has achieved such respect that in 1987 the government established Homeopathic drug detox clinics in six different police stations in New Delhi. A recent conference in India which described impressive results in the Homeopathic treatment of drug addiction received accolades from India’s Minister of Health and Family Welfare, the Finance Minister, and the Chief Justice. In addition to the Indian government’s support of Homeopathic drug detox clinics, they have also supported various research projects and Homeopathic hospitals and clinics. (Source [10].)

Now accepting new patients located in and around Fort Worth, Texas.

Tina also works long-distance, by phone and by Skype.